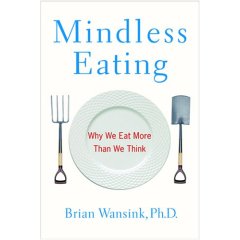 Ever rush through a meal and wonder later exactly what you ate? Ever sit down in front of the TV with a bag of chips and at the end of the show wonder how it was that the bag suddenly became empty?

We do so much mindless eating in our society today. Whether we’re scarfing down a bowl of cereal while watching the news in the morning or munching on a sandwich in front of the computer at work — it’s all mindless and utterly forgettable. While it may seem innocuous, the cues our bodies rely on to feel full are distorted when we eat without thinking, and as a result, we often eat more.

The Wall Street Journal had an article yesterday on mindful eating. The author suggests that people focus on each bite of food, savoring it slowly and carefully. One practitioner of mindful eating suggests people eat a single raisin very, very slowly to think about what it tastes like.

The article caused an uproar over at Jezebel.com, one of the blogs I frequent. The ladies over at Jezebel were horrified at the idea of the raisin experiment and generally think people should focus less on dieting and more on food (NSFW). I think they missed the point. The whole goal of mindful eating is exactly that — forget counting calories. Instead, eat (smaller) portions of good food, but eat them mindfully and slowly so that you’re not tempted to gorge.

On the topic of mindless eating, if you think you have complete control over what you eat, you must read Brian Wansink’s Mindless Eating. This Cornell Prof has done many, many sneaky experiments on people, serving them tomato soup in bottomless bowls, stale popcorn, cheap wine — all in the name of social science 🙂 But really, the book is fascinating. Even people who are researchers in the field are influenced by plate sizes, lighting, music, the number of people they are eating with… etc. In short, how much you eat is highly influenced by your surroundings and only by learning to recognize these factors can you fight the battle of the bulge. For instance, the more effort it takes to get to the candy bowl, the less candy you eat. Even if the candy bowl is several feet away, it will deter you more than if it is right next to your computer.

Or, in another experiment, he proved that the bigger the plate/bowl, the more you will serve yourself.

Oh, and if they place food in front of you — even if you are not hungry! — you will likely have some. So stay away from the donuts at work!

Really, check out this book. And focus on your food. Put away the magazine, turn off the TV, close the laptop. Your body will thank you for it.